Human has altered vegetation evolution process in southern China about 6000 years ago: a new argument based on a pollen record from marine sediments proposed by a research team led by Prof. Chengyu Weng at Tongji University, and published in Nature Geoscience

The human society is impacted by the accelerating global warming and deterioration of the environment.  It is commonly believed that the current global warming was originated in the industry evolution started at about 17th century, and the modification of the natural environments by the human activities mainly occurred one or two thousand years ago, which was triggered by the rapid increase of the human population and the alteration of the land-use. The natural vegetation was changed dramatically since then.

A recent research on the analysis of pollen and spores preserved in the marine sediments from northern South China Sea revealed a surprise results: The natural vegetation process was actually heavily influenced by the human activities in southern China about 6000 years, and the natural vegetational succession following the warming period（inter-glacial） started around 10,000 years ago (Holocene) actually was interrupted by human activities, and thus the components and the structures of the vegetation may have been already basically changed comparing to the previous interglacials since then. This phenomenon is discovered by a research group led by Professor Chengyu Weng at Tongji Univesity, and the conclusion is recently published on the website of the journal Nature Geoscience with the title “Anthropogenic modification of vegetated landscapes in southern China from 6,000 years ago”. The first author is Zhongjing Cheng, a PhD student of Prof. Weng， and Prof. Weng is the corresponding author of the paper. Drs. Stephan Steinke and Mahyar Mohtadi of University of Bremen are the other authors. 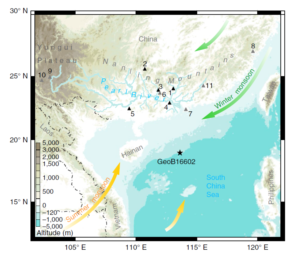 Fig. 1 | Location of the study site GeoB16602 (star) plotted on atopographic map. The Pearl River system and the general direction ofmonsoonal winds are shown. Triangles denote the locations of the earliestarchaeological sites related to rice farming which were dated between 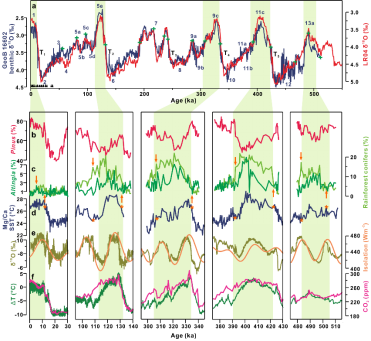 The pollen and spores from terrestrial plants which were preserved in a long sediment core (GeoB16602) from northern South China Sea （Fig.1） were analyzed in the research. The radiocarbondaing and curve matching of the δ18O of the benthic foraminiferal shells indicate that the core covers the continuous record since the MIS 13 (Fig. 2). By comparing the series changes of plant pollen and spores of the last five peak interglacial periods, Marine Isotope Stages(MIS) 13a, 11c, 9c, 5e and 1 (the Holocene), the research group found that the vegetation successions in southern China were basically similar: at the beginning of each interglacial period, tropical rainforest conifers, which include Dacrydium, Dacrycarpus and Podocarpus, and associated broadleaved taxa, such as Altingia, expanded quickly at the expense of the subtropical/temperate montane conifer pine (Pinus.); near the end of the warm periods, Pinus recovered and the tropical taxa retreated （Figures 2 and 3）.  However, the Holocene displays subtle but significant differences in which the species turnover was interrupted and the rainforest conifers never fully expanded. The Mg/Ca-based sea surface temperature record from the same site reveals that temperature was the major control of the rise and fall of the peak interglacial vegetation. However, exceptionally high charcoal fluxes during the Holocene suggest that human activities through land-use modifications completely, and possibly permanently, altered the natural vegetation trend five to six thousand years ago. 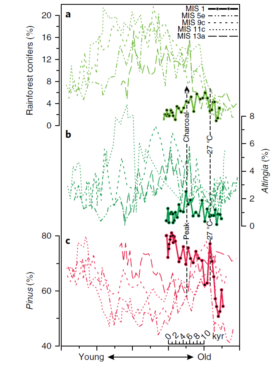 Fig. 3. Abundance variations of the key plant taxa/group for peak interglacials. The pollen percentage data of different interglacials are aligned using the age of a common temperature threshold at each glacial termination, and are plotted against the uniform time-length unit. Note the overlap between the Holocene and previous interglacials at the initial stage, and the systematic deviation following the 5-6ka charcoal peak in the sediment.

This discovery also means that the human influence was heavily under estimated, and the natural vegetation in the pollen source region, i.t. South China, has been modified since then, and the normally called “natural” may actually have not been so natural. Perhaps, the human beings living in this region have never seen what is real “natural” vegetation.