The South China Sea (SCS) is a hydrocarbon-rich major marginal sea in the western Pacific Ocean. One of the proposed driving mechanisms for its formation is the slab-pull of a Mesozoic ocean basin known as the Proto-South China Sea (PSCS), which subducted beneath northern Borneo between the Eocene and the early Miocene. However, the present-day depth extent of the slabs and even the existence of the PSCS remain highly debated. By stacking P-to-S conversions from the 410 km and 660 km discontinuities bordering the mantle transition zone (MTZ), we demonstrate significant MTZ thickening beneath the southern margin of the SCS, which, when combined with previously-revealed high-velocity anomalies in the MTZ, provides evidence for the existence of the PSCS. Chemically and rheologically heterogeneous materials segregated from the slab segments may have generated layered structures as evidenced by the discontinuities observed at the depths of ∼350 km and ∼730 km. Dehydration melting from the slab segments may be a viable mechanism for the extensive post-spreading magmatism in the southern SCS. 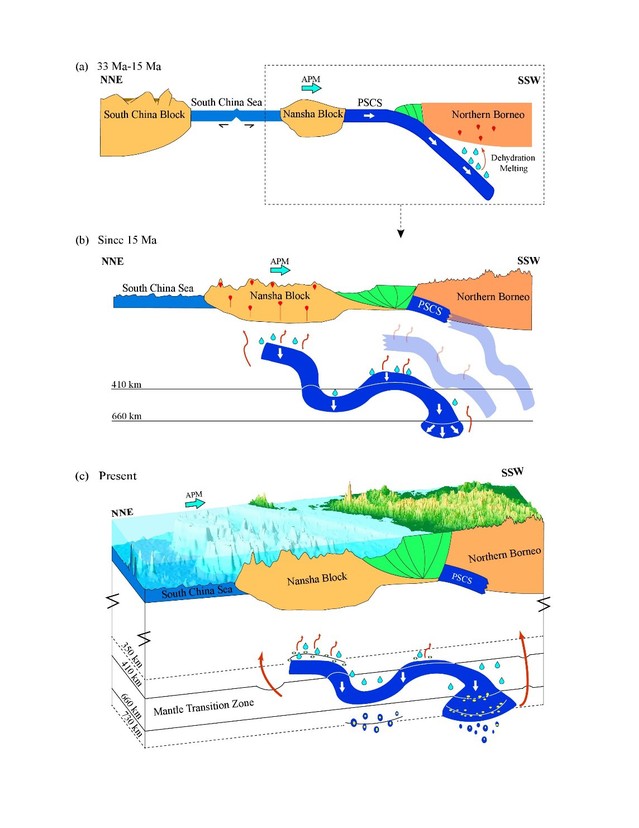