1 Authors who contributed equally to the work.

This study presents a detailed sedimentary geochemical record of International Ocean Discovery Program (IODP) Site U1489, which was drilled off the northeast margin of Papua New Guinea (PNG). Focusing on the

geochemical characteristics and the extent of chemical weathering of siliciclastic component, a total of 183 samples from the upper 84 m of Site U1489 are used to reconstruct the PNG sediment supplies to the tropical western Pacific over the last 4 Ma. Our geochemical results show a 3-stage variability in Site U1489 sediment composition, which are well related to regional tectonic and climatic changes. Stages III (~4.0–3.5 Ma) and II-A (~2.9–1.7 Ma) are characterized by more enhanced and variable contributions from mafic-rock sources than that of felsic-origin. This interval is shown to be accompanied by relatively rapid sediment delivery and more dynamic depositional environments that are possibly related to marginal mixing, coinciding with more frequent PNG tectonic events. In particular, increased contributions derived from ultra-mafic/mafic rocks are recorded between ~3.5 and 2.9 Ma, which is attributed to increased ophiolite input due to arc-continent collision. Accordingly, these results give a consistent but refined timing for an accelerated plate suturing at the eastern margin of PNG. By contrast, Stage I (~1.7–0 Ma) is characterized by a relatively constant background supply of finer particles, showing a persistent increase over time in the intensity of chemical weathering. This increased weathering trend is reported for the first time for the tropical regions of western Pacific, and it is interpreted as indicating a strengthening of the Walker Circulation in the past ~1.7 Ma. Overall, the interpretations of the siliciclastic fraction from Site U1489 presented in this paper provides crucial clues to distinguish the tectonic and climatic influences on the PNG sediment inputs during the Plio-Pleistocene. 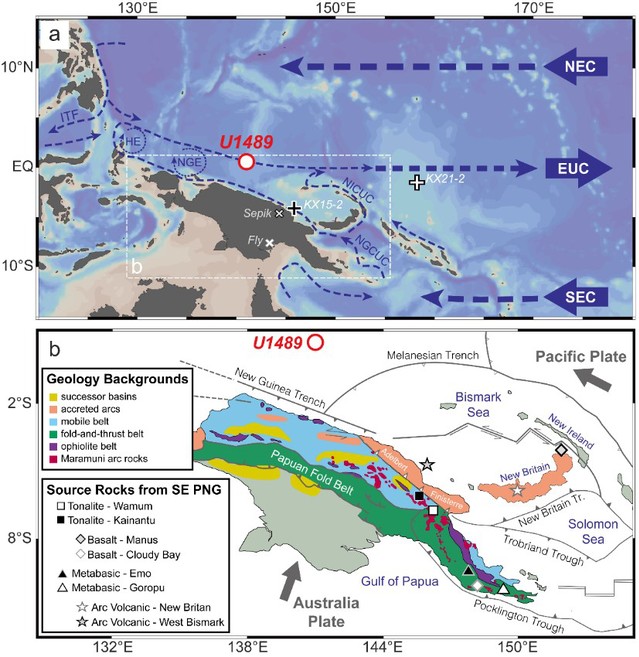